I recently came into the possession of two novels, both of them by acclaimed author Haruki Murakami, Norwegian Wood and After Dark. I feel guilty for not discovering him earlier. In fact I only realized his existence after reading over a list of foreign writers we could use for our World Literature essays (HAHAHAHAHA IB), and went “Wait! This guy’s Japanese!” So yes. I started reading his work purely based on race. Shut up.

The Not-As-Good One. I bet it cries at night

I can immediately say that they’re fantastic reads, and entertaining for anyone who wants to read emotional drama. Murakami’s style and prose captures the essence of the characters he writes. I was honestly amazed with some of the writing in Norwegian Wood, just how gripping the content was, no matter how little actually happened. After Dark was a little less impressive because while it had the same style as Norwegian Wood, it didn’t have the same intrinsic value as Norwegian Wood. Let me explain, Norwegian Wood takes place in Japan during the 70s, and talks about the alienation of people in that era. If looked at logically, the narrator does nothing but listen to long monologues for most of the book, and yet so much of what is being said is interesting it doesn’t matter.

After Dark has much more happen, while less is being said outright. Though there is merit in delivering a novel like that, the problem with After Dark is that Murakami doesn’t pull it off. The story seems to build up to a climax that doesn’t exist. The characters certainly develop, and most of the problems have resolutions, except for two. And if you read it you might get the same feeling. The odd sensation that you’ve missed 5 or 6 pages somewhere that delivered important plot information, and maybe I did. I certainly did read it late at night. However, in Norwegian Wood, you’ll know the climax what you see it. It’s the beginning of a soul crushing chapter, written in font slightly bigger than the rest. Based just on this I have to say Norwegian Wood is the better of the two books.

WARNING – WARNING – MATURE SUBJECT MATTER AHEAD. IF YOU’RE TWELVE OR ACT LIKE YOU ARE STOP READING.

Regardless, what prompted me to write this article is not eloquence, it was sex, to be honest. Norwegian Wood is full of sex. It’s justifiable, since this novel takes place during a time were sex among teenagers began to be a way to express yourself. You could be rebellious by having sex, or you could prove your love for someone by 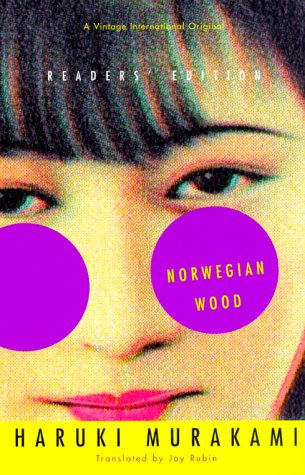 breaking the rules to do so.  It’s not that it became more acceptable, perhaps more liberal is term. My point was that there are times where the sex seems a little gratuitous and a little awkward. One chapter in which a character stated that she could help if he needed to get rid of some semen strikes me particularly. It puts the act of sex as a passé action, but also makes it seem generous, as if the act is a private moment of both giving and taking. It’s powerful, and it just plain creeps me out.

This is probably because I’m 17 and male, and a good part of me is remarkably immature. Still, I have to commend the man for not branding it as complete beauty or damning it as a perversity as we are so keen to do. In fact, when the main character makes the decision to commit himself and his body to his girlfriend, Murakami makes sex appear like a beautiful thing, while showing how it can be used badly.  Now, my literary prowess is limited due to age and laziness to read anything outside of school curriculum and fantasy, so I’m likely over glorifying the writer in this aspect. Yet, it still astounds me how much it made an impact.  And for that Murakami is awesome.